I'm in a posting mood so I figured I would share what I had to do to correctly install these m***** f*****'s in case anyone else is curious about changing to these.


Here's what I bought: 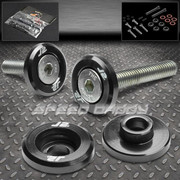 The whole reason for buying these stemmed from trying to find new replacement bolts. The original ones were stupid rusted, and there was no way I was going to reuse them. This D16Y8 came out of a Canadian vehicle, so road salt had it's way with all the engine fasteners (almost all the rest of the engine fasteners have been replaced with new stainless hardware, VC bolts were one of the few things left during this part of the build).

When I searched "D16Y8 valve cover bolts" in Google and eBay, I saw some used offerings. I couldn't understand why these things were going for $25 for the set, in about as rusted condition as my original ones were!

I couldn't see paying $25 for these bolts, so I went on a Honda parts website. It was at that time I understood why these used ones were $25 bucks.... 9 dollars per bolt?! Really Honda?! Head bolts are only $2 more, of which ARP's are honestly a much better value in comparison! Son of a b****! Well, do I suck it up and throw down for the new ones OR chance it and buy some of these eBay valve cover washer/spacer things? I chanced it

When I bought them, they were even more on sale than they are right now (only on eBay i swear lol). I paid $7.50 for the kit.


I opened it up, and found the aluminum washers to be decent pieces that appeared to be cut from a billet. The hardware in the eBay picture is false, you get even crappier hex head bolts than what is shown. The hex appeared to be hot punched and slightly off center, which guaranteed a 99.9% chance of stripping out the first time you apply torque to it:

About the time I didn't think it could get much worse, it happened. What was shown on the eBay posting picture as like a red (maybe plastic or copper) sealing washer, I received f****** punched out cardboard circles. I would have been less shocked if it was like actual gasket paper or something, but my box of f****** Corn Pops is made of better cardboard than these damn things:

The rest of the hardware appeared to be somewhat decent, the short M6x1.0 threaded rod and the aluminum stand pieces seemed alright:

The only good news was that the 3x front washer pieces with the three longer screws in the kit worked very well, plenty of thread going into the cylinder head aluminum and proper fitment/alignment with the valve cover.

If you are curious about the 5 little black orings that come in the kit, throw them away now. They were a last attempt as a way to seal things, and will cause leaks/fastener torque issues if used as intended (they seem to be intended to be crushed between the screw heads and the aluminum washers, not a good way of doing things!). I have a much better way of sealing things, keep reading. Just seriously throw them away now, or put them away for use as spare orings on something else. Do NOT use them with this kit!!

I test threaded the aluminum stand pipes loosely for fitting purposes, and found that the hex parts of the stand pipes hit the valve cover and did not allow the stand pipe bolt hole to properly line up with the valve cover bolt hole. Enough rambling, the following is a picture show illustrating everything I did to make it work properly and upgrade the necessary components to guarantee function.
► Show Full Signature
My Recent EG Hatch Build

Everything in the "What You Need" section can be sourced from your local hardware store. Hopefully you already have most of the consumables, saving you even more money on this install.


1. On the short M6x1.0 threaded rod, take a file or colored marker and gently cut an identifying line into the metal marking the center of the rod:

4. Perform the above steps for the remaining stand pipe, until you have two ready to use pieces:

5. Let the retaining compound set up. Leave the pieces alone for about an hour. Loctite Retaining Compound (dubbed Green Loctite) is essentially specially designed superglue for all kinds of metal threads/surfaces in all types of environments. If Blue Loctite is medium strength, Red Loctite is high strength, then Green Retaining Compound Loctite is MF'ing Hulk strength! Seriously, don't ever use Retaining Compound on threads you plan on removing fasteners from at some point. In aluminum, you will strip threads/break fasteners before this stuff gives way. Occasionally if the fastener is in a non-heat sensitive setting, you can heat it with a torch and it will soften the Retaining Compound bond enough to remove a fastener. This is seriously strong setting stuff!

8. The valve cover should fit well now, and leave plenty of room for properly seating the spark plug tube seals. At this time, grab your valve cover aluminum washers/sealing washers (copper or vinyl, I used vinyl)/new countersink screws and install everything to test fit. Only SNUG things down by HAND and an Allen key, do not use ratchets/torque wrenches YET:

93 Civic HB SI
Joined Jul 27, 2018
·
523 Posts
I don't have pictures of the rest, as the engine sat for a while before I got it in the car but I can walk you through successfully getting these things to seal and STAY sealed once the valve cover gasket is installed.


9. If you are ready to reinstall the VC to the cylinder head, make sure the VC is CLEAN of any aluminum bits/pieces from shaving the cover for fitment reasons.


10. Install your valve cover gasket using normal procedure. Once the valve cover is down and seated against the cylinder head, locate and ready your crush/sealing washers, aluminum countersunk washers and new fastener hardware.


11. Place a dab of blue Loctite on the ends of the new valve cover hold down screws, center your washers/sealing washers in the valve cover holes, thread the screws into the cylinder head/standpipes leaving about 1/4" to 1/8" of the screw head sticking above the aluminum washers.


12. Take some liquid teflon thread sealant/pipe dope and put a few drops in between the valve cover hold down screw heads and the aluminum valve cover washers, coating both sides of the countersink faces.


13. Hand snug ALL of the fasteners down in an even fashion, starting from the middle fastener and working towards the edges of the valve cover. Once they are all good and snug, use a torque wrench to tighten the fasteners to 6-8 ft/lbs.


14. After tightening, wipe away any excess liquid teflon from the screw/washer mating area.

Congratulations! Don't you just wish you threw down the $50 bucks for the stock fasteners now??!! Hope this helps someone install these correctly!

All in all, I already had most of the Loctite consumables so the only things I had to purchase were the new screws and sealing washers to improve this install. It cost an additional $5.00 for those, so I'm at a total of $12.50 for new valve cover hold down components and about an hour's time to get everything to work and fit correctly.

Moving forward, these items will allow for service just as easily as stock bolts do. Just don't forget to apply new blue loctite and liquid teflon to them when reinstalling if the valve cover has to come back off! Not only does the liquid teflon allow for leak sealing between the countersink surfaces, it also acts as a material to even torque load scatter that occurs when metals grind against each other during torquing, offering even bolt torque application.
► Show Full Signature
My Recent EG Hatch Build

Chrisfrom1986 said:
Way too much to read but if you're tightening these or oem bolts any more than hand tight you will strip the cam caps and you're screwed at that point.
Click to expand...

Yes, 6-8 ft/lbs is just like snugging up by hand Many times a good installer can determine by feeling what feels right for a given application. That being said, there is also almost always a recommended torque spec for every single fastener.

There is always a bright side to stripping out anything aluminum if it does happen, you get to put in a helicoil so it won't happen again!

Steel fastener - to - aluminum threads are not very forgiving under excessive twisting force, there is material tensile strength inequality and different shear forces at work so it's much easier to realize stripping threads in this situation.

With a helicoil insert, you've just made steel fastener - to - steel threads a reality within an aluminum part. Bringing in alike metals when talking twisting/pulling forces against each other such as when torquing/tightening is a much better thing overall.

So many fasteners are sunk in my block with helicoils, thanks to the Canadian road salt
► Show Full Signature
My Recent EG Hatch Build

94 Del Sol si
Joined Feb 2, 2010
·
489 Posts
You were supposed to install the extender tubes with the hex side against the cylinder head, then you would have had more clearance to put the valve cover on because the thinner side would be on the top.
► Show Full Signature
1994 DELSOL SMF :honda:

LTB said:
You were supposed to install the extender tubes with the hex side against the cylinder head, then you would have had more clearance to put the valve cover on because the thinner side would be on the top.
Click to expand...

This never even occurred to me once, I was just set on crushing that little threaded rod in the tube for retention because somewhere in my future I would drop the little piece in the head if I ever needed to take it back off haha!

I can't help but to re-engineer the wheel....... thank you for pointing this out!
► Show Full Signature
My Recent EG Hatch Build
S